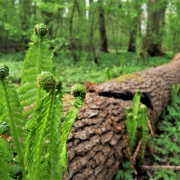 For years, at the time when the wood anemones are in perfect bloom, I have travelled to my cottage passing the Town of Ekenäs and the grove paradise of Ramsholmen. I have always dreamed of stopping by the grove to marvel the breath-taking beauty it offers in the spring. I am happy, though, that I have not done it in passing, because Ramsholmen deserves a proper and unhurried visit.

The 55-hectare forest park of Ramsholmen is made of three adjacent areas: the cape of Hagen and the islands of Ramsholmen and Högholmen. A wide bridge leads from Hagen to the island of Ramsholmen. In Högholmen, there is a narrower and longer bridge. Going along the beautiful bridge over the cane grass-adorned river bed, we embark on a trip to see how spring in the grove paradise looks like.

Getting warmed up in Hagen

I have my trusted travel companion Jetsu with me. He is a Labrador retriever and he’s fond of everything outdoor. He is on a lead, because we are in a nature preservation area.

In the unlikely event that some dog-owner does not remember this, there is a sign to remind them that it is mandatory to have pets on a lead. Having pets secured ensures the nesting peace of birds and protects other wildlife as well. We had to pose by the sign for the first photograph.

To guide the travellers, there is also a signpost by the wide gravel road of Hagen, nicely covered in moss.

Today, we are walking with our senses open. We stop, look, listen and sniff. Both of us. Although the small town of Ekenäs is only a stone’s throw away, suddenly it feels that we are in a different world altogether.

It is so quiet and peaceful that you could almost hear things growing. Only birdsong breaks the silence. A bird expert could probably name all the singers, but I recognize only a few.

Ramsholmen is still ahead, but I am already in total awe. They’re everywhere – the wood anemones – as far as the eye can see! These are the provincial flowers of Uusimaa.

The grove paradise of Ramsholmen makes my head spin way before we even reach the actual place.

In addition to the wood anemones, Hagen has two old villas, built in the 19th century. The other villa, painted yellow, is located at the southern tip of Hagen. If we kept walking along the southern shore of Hagen towards the east, we would reach the camping ground of Ekenäs.

If we wanted to stay overnight, the Tammisaari Camping ground would be the closest possible site for setting up a tent, because camping is not allowed in Ramsholmen.

The island of Ramsholmen is also accessible

After a short and easy hike, we come to the bridge that leads to Ramsholmen.

I cross the sturdy bridge with my canine buddy. The paths on the island of Ramsholmen are smooth, wide and hard-surfaced.

This place grows greener and greener by the day. It allows access for almost any type of unmotorized vehicle; a pram, wheelchair or a bicycle for instance.

We see many people of all types and ages: there are people with children enjoying nature; single people exercising with their headphones on, people listening only birds, and people with dogs.

What connects all of them is nature. They have come here to feel better and to reduce stress, and what would be a greater place than this green oasis!

I would have no problem of spending the whole day and enjoying life here; the nature of Ramsholmen is so unique. I could sit down on a bench for rest, or go for a picnic. There’s also a beach in case it gets hot or if I want to go for a swim.

Are you really hungry, but didn’t bring any lunch with you? No problem, because the beautiful centre of the Town of Ekenäs is only a little more than a kilometre away. There you can find all necessary services.

The wood anemone and other beautiful flowers in the grove bloom early in the spring just before the trees come into leaf. This happens because there’s plenty of light to reach the forest floor. When the trees are in full leaf, the amount of light on the ground is reduced.

I suddenly hear a low buzz. Where does it come from? Looking up, I can see where: many hardwood trees of the grove bloom before they come into leaf, and numerous busy bumblebees are doing the best they can to pollinate as many flowers as possible. Those chubby little friends are keeping busy!

Ramsholmen is renowned for its wood anemone. But there’s more.

One of the other tree species that’s found plenty in the grove is the Norway maple (Acer platanoides). It too blooms early in spring.

Looking back down towards the ground, I see some yellow wood anemones (Anemone ranunculoides) in the midst of the white ones. I have rarely seen the yellow species, perhaps this is the first time ever that I have come across them?

Although the fumewort (Corydalis solida) is one of the first flowers to have started blooming, they are still looking so beautiful!

Even after the anemones have stopped blooming, the grove doesn’t rest. The paradise grove is teeming with life. A group of other plants is waiting for their turn, such as herb paris (Paris quadrifolia) and the ostrich fern (Matteuccia struthiopteris).

When the ostrich fern begins to flaunt its feathers, Ramsholmen starts to resemble a lush jungle. That I would like to see. So I have to come back in the summer.

The lily of the valley (Convallaria majalis) is too almost ready to spring up. In a matter of days, it will be spreading all over the place, both physically and in scent.

It seems, though, that the bird cherry will take the first place in the competition of which plant smells the strongest. It will most likely be the first one to pop open its inflorescence.

A rank outsider takes the race of bloomers in the early spring. The first runner-up will be the Norway maple. I don’t remember ever looking the inflorescence of the ash tree so close. Oh my goodness the beauty of it!

Whereas the island of Ramsholmen is easy to walk on, the neighbouring wild Högholmen is a different story altogether.

A beautiful, long and narrow bridge is leading to Högholmen. Someone has left two bicycles waiting by the bridge. That is a smart thing to do, because Högholmen is no place for bikes. The narrow, in some places root-covered paths, are unforgiving and would turn to mud when it’s wet.

We decide to take our trip counter-clockwise around Högholmen. The path is leading to the jungle-like grove.

The wooden causeways suggest that this place must be quite wet when it’s raining. Along the way, there’s also a small bridge to cross.

After the wild grove, the path begins to go upwards, and more and more coniferous trees appear. Finding their way through the rocky ground, the roots of the trees have made the trail very uneven.

We are admiring the view on the cliffs of the southwestern tip of Högholmen.

On the cliffs, there are many dead trees still standing upright. If we were to stay longer, this would be a perfect place for watching the sunset.

There are many black marks on the cliff. That means that someone has made a fire here, which is not allowed. It should be remembered that making an open fire is not a so-called everyman’s right. Campfires are only allowed on designated campfire sites. Other than that, you will always need the landowner’s permission.

On the southeastern slope of Högholmen, the coniferous trees give way to deciduous ones once again, and the trail becomes easier to tread. The only exception is a fallen dead tree that cuts the path.

Fallen trees have their own and important function in the ecosystem and in preserving the biodiversity. Trees offer hiding places for insects and food for birds.

There are benches in Högholmen, too. Although just simple plank ones, as you would expect to see in a place like this, they still offer good resting places.

Sit down for a while and look around to catch the fleeting spring.

You could also study the little leaves of the rowan, or the modest inflorescence of the mountain currant. Or explore the lilies of the valley which grow so abundant that you could find them with your eyes closed – so strong is their scent.

On our way back to Ramsholmen’s side, we stop and log a geocache by a bridge crossing Blindsund. The cache seems to require some serious maintenance.

While we were having an adventure in Högholmen, the sun had gone hiding behind a curtain of clouds. It is the night before May Day (also called Walpurgis Night) and many people have arrived in Ramsholmen to celebrate the event.

We spot a yellow dance hall still in use during the summer months, and the forlorn remains of a summer theatre that was built over a hundred years ago. Nature is slowly claiming the land back, and trees are growing between the rows of benches.

On the side of the wide main trail, there lies a weird-looking rotten tree. How would that seem through child’s eyes? A dinosaur, crocodile or perhaps something else?

We have explored Ramsholmen back and forth and over again. My sport watch has tracked almost seven kilometres. Could have been lot less if we’d been just taking a straight route.

What does spring in the centre of Ekenäs look like?

Spring evening at the centre of Ekenäs might look interesting. Actually, on our detour we get an unforeseen bonus: Sargent’s cherry (Prunus sargentii) is blooming pink like crazy next to the former town hall which is also brightly coloured yellow.

The old town hall of Ekenäs is beautiful. Although the sign for tourist information still exists on the corner of the building, the actual information point is elsewhere. It is located 120 metres from here in a pretty red wooden house, in the same place where the EKTA Museum is.

The current town hall is handsome, too. It used to be an old psychiatric hospital, and the town spent 8 million Euros to make it the new administrative centre. Only the facade reminds us of the bygone era; everything else is new.

The old centre of Ekenäs is idyllic. Too bad that the EKTA Museum on the Kustaa Vaasa street has already closed. Had it been open, I could have asked the tourist information agent for some tips for my next visit.

Next time, I will walk through the oldest pedestrian street in Finland, the Kuninkaankatu Street. After doing some window-shopping on the small boutiques, I will head to the narrow alleys of the Old Town that was founded in the 16th century. Many of the narrow alleys running between idyllic wooden houses have been named after artisans.

After having walked through the Hansikkaantekijänkatu (glovemaker) street and Satulasepänkatu (saddlemaker) street, I will eat a tasty and unhurried lunch, taking in the atmosphere of this lovely little town with all my senses. Then, it is time to head out to Ramsholmen to see how it looks, smells and sounds like in summer.

I am thinking how privileged we are to have four seasons, and how our nature is so diverse. And most of all, how each one of us can enjoy it freely.