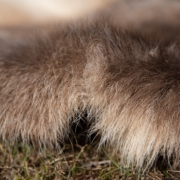 For first timers it might cause a minor headache to think what’s necessary and what’s not for a hiking trip. As in any hobby it takes time for one’s gear selection to reach the fragile stability of essential and convenience equipment, and truth be told there has been a number of times these gadgets have caused genuine laughs around camp fires. Check out these creative items our active hikers carry around!

A piece of a reindeer

“Irregularly shaped piece of a reindeer skin is a perfect sitting pad! I borrowed (as in: robbed) it from my mum, who originally purchased it from Lapland for a couple of euros from a souvenir shop’s sale corner if I remember correctly. Now a days it warms my bum rather nicely even when the temperatures are really freezing, and it also easily rolls neatly to be carried with.”

“This princess canopy is a wonderful cover for mosquitoes in Finnish summer. I fasten it to a lean-in-shelter or a teepee with pins. To cover the buzzing noise of the insects I also have earplugs. Sweet, undisturbed dreams!”

“This stetson is made from actual jeans, the denim is from the 90’s. I found the pattern online, scaled to fit my head perfectly, printed on paper and cut the pieces from jeans. Missus sewed it all together. It’s hot as hell but definitely an eye catcher and you’ll recognize me anywhere! 😎👌”

“Somethings are certain, like the fact, that I always enjoy my morning coffee with warm, frothed milk. On a one hapless trip everything had been according to Murphy’s law. I was exhausted and still looking for a good spot to spend a night and was a bit displeased hearing this weak machinery noise coming from somewhere. Could have been a power line or such, I thought. Later on I realized that it had been my poor frother that had buzzed out all of its energy in my backpack.”

Knives along the years

“I used the first two knives for 30 years. The first was a good tool for cutting wood or branches and the second for carving tooth picks.Now they serve mainly as dear keepsakes or relics. Now a days I rely on cheap expendable knives so that I wouldn’t worry or cry about losing them. It’s rather nonchalant to open conservative food cans with them. All that HiFi-bragging in the woods is just pointless.”

“I get funny looks from folks as I walk in public with my backpack and gear including my century-old axe. It genuinely is about 100 years old, ‘Billnäs 12.3., so called Kemi-model. According to folklore it’s the type of an axe this country was built with.”

Cosmetic purse as a trangia-cover

“My father was a Great Adventurer. I have inherited plenty of camping equipment from him, also my trangia-camping stove and its coverbag. My father had a habit of using this trangia also on an actual bonfire where it naturally became sooty. My mum, being the neat and tidy person she is, was worried about the rest of the camping gear getting dirty from it and gifted my father with this overly fabulous Yves Rocher cosmetic purse which is a surprisingly perfect cover bag for the trangia! It’s almost like tailor-made. Now having inherited it, regardless of the funny looks it gets, I carry it with pride and a twinkle in the eye!”

“It is just a water bottle, but folks notice it every time. I’ve had it for about ten years now. I bought it during my studies when I wasn’t yet an active hiker at all. These bottles designed by Stefan Lindfors were sold for about a euro each and were nominated as the “most-useless-item of the year” if I remember correctly – even if a share of its profit was given for the reservation of the Baltic Sea. This sturdy bottle has stayed with me ever since and has been a faithful companion on all of my trips and hikes. “

“Bamboo cutlery and chopsticks in a cute bag. Chopsticks are surprisingly handy for stirring, turning, poking and eating food. I use them for basically everything – for stirring coffee too – except for eating morning porridge. Bamboo is a light material so these won’t add extra weight to my backpack and they can be placed to hang outside of the sack too. I’ve used this set for already three years and originally purchased them online only due to their cute looks. They turned out to be an equipment that I carry with me wherever I go. First it was the spoon that was in heavy use, but then I realized how clever of a tool the chopsticks are. Now I actually use them also in my home kitchen too.”

“I carry this century-old nip glass with me for celebratory events during my hikes.”

“One of my most loyal camping items, especially during long-distance hikes, canoeing trips and other adventures during gloomy autumn and winter hours, is this rechargeable light I found from Lidl a few years back. I found it only that once in that one specific store, so unfortunately I can’t tell anymore where to get them!

The blue shimmer should also work as an insect repellent, but in reality it just doesn’t happen. This is the only weakness of the light – otherwise it has been a wonderful item to any tent, hut or teepee. It gives enough lighting and the battery lasts rather well. I charge it with a portable usb-charger which serves my other gear as head torch and mobile phone too.”

Is there something goofy or clever you carry around in your backpack that not every other camper has? Please share your item and its story in the comments!