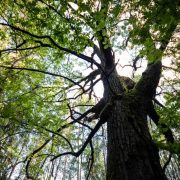 On Ekkudden’s nature trail you will encounter enchanting oak trees, linden tree landscapes, whispering spruce trees and a bird’s eye view of rustling reedbeds. The trail starts approximately 3 kilometres south of Porvoo’s town centre and is about one and half kilometres long. Although this distance sounds short, allow plenty of time for a trip down the path, as I ended up stopping constantly! On reaching the field you come across the first information board. You can start your walk by reading about the Stensböle nature conservation area and the history of Stensböle farm in English, Swedish or Finnish. The area is currently owned by Swedish Literature Society. From here, a path that winds alongside a ditch, leads into the forest.

The Stensböle area, which belongs to the Natura 2000 Europe-wide nature conservation network, is around 1131 hectares, of which about half is water and reed beds. One thing in particular stands out from the story of Stensböle farm, and that is potato farming. Wentzel Frederik Rotkirch, who became familiar with the potato crop during the Pomeranian War (1757-62), started potato cultivation on the Stensböle farms (the potato, at the time, was unknown in Finland) and boiled potatoes became part of the festive table. Rotkirch distributed seed potatoes free of charge to locals and, for a while, sold potatoes locally. Eventually potato farming became more commonplace and Stensböle returned to cultivating them for personal use only. I started to walk the nature trail counter-clockwise, turning right at the information board. The area is classified as a nationally important deciduous grove conservation area, which doesn’t surprise me at all. Everyday potatoes and worries are forgotten instantly as I look around me at the grove that oaks and linden trees have claimed as their own. Many broadleaf trees poked their branches out pretty high and the grove had a delightfully large number of trees of different ages, not just oaks and lindens, but also maples. Lilies of the valley have scattered themselves over a wide area here, so in spring there are plenty of white flowers.

A dark brown bird that I didn’t recognise rocked on the branch of a linden tree and then fluttered off on its way. I couldn’t keep myself on the path any longer and got momentarily sidetracked peering into the depths of hollow of a tree, among other things. At the start of the path there had been warnings of decaying trees. And it was true, that some of the older, larger individuals looked like they wouldn’t remain upright forever. One had fallen, somewhat stylishly, over the path, creating a gateway. I admired how nice it looked… Of course, it did also occur to me that this leaning tree should be kept an eye on, particularly if walking the nature trail during a storm. A moment of bad fortune could have the wind send the tree crashing down onto the path.

The grove is almost certainly going to be stunning with fresh green hues in spring, like it was now in the early evening. It was quite magnificent. Maybe even more impressive than in the middle of the day. There is plenty here for botanists to identify and with a some luck, butterfly watchers can catch a glimpse of a couple of more uncommon moths in the linden grove. While walking the nature trail you shouldn’t just keep your attention on your feet and what’s in front of or to the side of you. Sometimes it’s worth stopping and looking back, as you might notice something completely different about the landscape. And look up! A joyous green network of twigs above your head against a blue and white sky can be a wonderful sight to behold. I stepped out of the bright green of the grove and onto the beach, where a stylishly greying snag ruffled its branches. Vast reed beds imprinted the landscape and got me wondering if they might attempt to choke the coast and how long that would take. I sat down for a moment and let the sun warm me.

As I looked in the direction or central Porvoo, I could mainly see a green horizon with the exception of a few towers. To the south, Stensböle’s unbuilt shoreline continued, and on the opposite shore was Sikosaari (Pig Island), where there is also a nature path and a birdwatching tower. It’s amazing how close to the centre all of this is. The sound of cars doesn’t carry into these landscapes, and I haven’t even seen a single boat weaving through the midst of the reeds. I got up and started walking towards the south on the nature path, weaving pleasantly between the trees, where I came across stonecrops, Scented Solomon’s Seal and harebells, to name but a few, on a rock under the watchful eyes of a couple of dead standing pines. The grove started to gradually get left behind and the terrain became coniferous, the territory of old spruce and pine trees. Soon after that was an obstacle: a spruce had fallen across the path. Hidden behind it was an information board about the black woodpecker. I walked around the dead spruce from the left.

The path came close to the border of the seashore, after following the moss-covered remains of a stone wall. From this we could conclude that these lands have been coastal meadows or pastures, but how long ago? In the spruce forest I came across the only other travellers on the path, a couple taking their evening walk. The whole time, while keeping one eye on the rolling path, every now and then my nose picked up on something fresh and delicious to pop in my mouth, which is normal during berry season. At the same time I extended my neck to peer at mushrooms while passing by, even though I had no intention of picking them and taking them with me. This time it just wouldn’t have been possible for me to take my harvest all the way home. And then, just before the birdwatching tower, it found me!

A sturdy-stemmed cep basked in the sun and whispered ‘Take me! Eat me!’ Since the couple I had come across earlier had managed to get much further ahead, I couldn’t call out to them to take this cep away from a wormy fate. Mushrooms can’t really be reserved and collected on request, so I just hoped that the next walker would notice and pick it before it was too late. Or even that a squirrel would have the sense to go get it and stash it for winter. After bidding farewell to the cep I was already at the Ekudden birdwatching tower, which was in great condition. I climbed up to look at the view and had to protect my eyes from the dazzling sun. Thankfully, I did have sunglasses with me. In the forest they’re not needed but in sunny spots protective shades might be necessary.

From the edge of the forest, the rustling reed beds opened out as far as the eye can see, even though the tower isn’t massively high. The wetlands are unbelievably extensive. When looking around from here, the first words that come to mind are not ‘city’ and ‘park’, but Stensböle is also a part of Porvoo’s National City Park, which includes diverse urban nature as well as built urban areas. From Ekudden’s birdwatching tower, you can make out two other birdwatching towers with your bare eyes. On the opposite shore stands Sikosaari’s birdwatching tower and to the north, on the same shore as Ekudden, is Ruskis tower. From the towers one can conveniently observe many different types of winged beings outside of migration and nesting times.

Ruskis tower is close enough to the road for visitors other than nature lovers – this is evident from the marker pen scrawls on the tower walls. Ekudden’s tower has been spared from vandalism due to its sheltered location. From the birdwatching tower the nature trail curved slightly inland. I hadn’t inspected the nature trail map closely in advance, so the sign ‘Big Oak’ came as a pleasant surprise. This oak doesn’t have a reverential clearing surrounding it (as with Paavola’s oak in Lohja) nor has it been allowed to grow into such a voluminous shape, but nevertheless, this too is a fine oak! Having seen some life, this oak had something satisfyingly mystical about it. Maybe the seductive early evening light sent my imagination flying into the world of tales and stories as I looked at the tree.

It would be nice to know what age this big oak is estimated to be. The tree has clearly been revered for a long time, as it has been preserved. Other oaks this large have not been found in this area. After the big oak, a few largish rocks stood out from the surroundings – or large at least by Ekkudden’s standards – but otherwise it started to feel like the trail’s main highlights had been experienced. All that was remaining was a short, peaceful stroll. Should I still pick a couple of sprigs of wood sorrel from the side of the path?

Up to this point, many mini experiences had been packed into around a kilometre and a half. Along the Ekudden trail, in a relatively small area, Stensböle has a diverse range of different forest types, rocky coastal landscapes, opportunities for birdwatching, mushroom picking and berry picking as well as the option of taking a slower pace, allowing for more observation. The path was on even ground with virtually no changes in elevation, making it easy to walk. Occasionally you might need to watch carefully where you step as tree roots, for example, can always take you by surprise on a forest path. When the path reached the side of the field, I was already near my earlier place of departure. The adjacent field had been a watery bay in the 1500s, which quite clearly shows the impact of the land rising. In the spruce forest, which had sparse undergrowth, trees that had fallen across the path had been sawn, but in the nature conservation area, wood had been allowed to rot in peace. The narrow duckboards also showed signs of decay… The ground wasn’t as wet here as in the swamp, but  overall, duckboards are useful even in these kinds of places to protect feet from getting wet. In dry weather you can walk alongside the planks.

Ekudden’s nature trail had something magical about it; the first part of the journey in the deciduous grove enchanted me completely.  More accustomed to walking in mixed forests, I especially enjoyed the green magic of the oaks and lindens, that gained more intensity from the evening sun. And what if I was in Ekudden on a misty spring morning or at the beginning of summer? I wasn’t surprised by the fact that when I got back it was around 7.30 in the evening. Looking around the carpark at that time, I saw one person leave to start their atmospheric evening walk along the nature trail.

Location/Directions: About 3 km south of Porvoo Bus Station, on Porvoo river’s eastern side, a reasonable cycling or walking distance from the centre of town. Ekudden’s nature trail starts next to the Tarkkinen playing field. The sandy field with its car park is at the address: Tarkkistentie 153 (Porvoo). You know you’ve come to the right place when you see a funny bear statue on the side of the playing field. The nature path map can be found on the playing field changing hut wall. The easiest way to the path is from next to the changing hut and from there to the playing field’s back left corner (looking at the car park), although the birdwatching tower signs point to the left of the changing hut, towards the field.

Please note. Mountain biking and driving of motorised vehicles as well as open fire are forbidden.