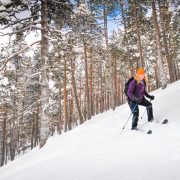 Short skis with skins are ancient, dating back 10 000 years. They represent skis as they were originally! Today they have been “invented” again to suit modern day winter adventurer. I tested skishoeing in lovely Pyhätunturi in the heart of Lapland. 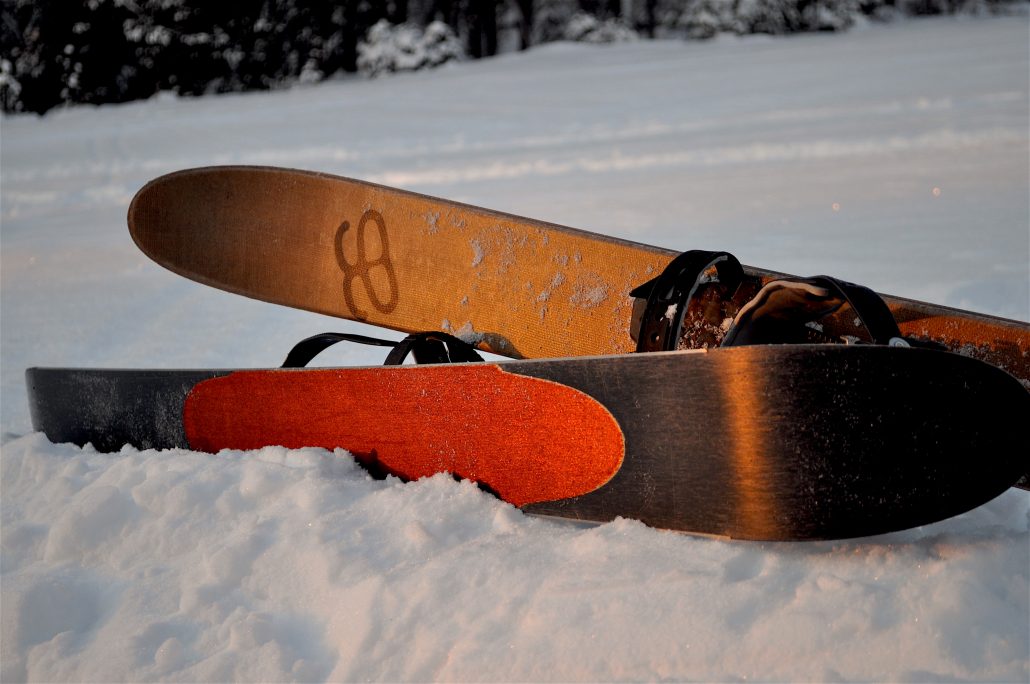 Skishoes are short and wide. These are only 125 cm long, up to my shoulder. They have a hairy skin integrated on the backside for grip, but only partially. The bindings works for any shoes, I had my hiking boots with a couple of woollen socks.

Skishoes are literally a hybrid of skis and snowshoes.  But as you cannot have it all, they come with some compromises. They glide as skis, but not as well as proper skis. When climbing uphill they get traction like snowshoes but not quite as well as snowshoes when it gets steeper.

For me skishoeing was a new form of winter sport. Soon after setting off I decided I love it. 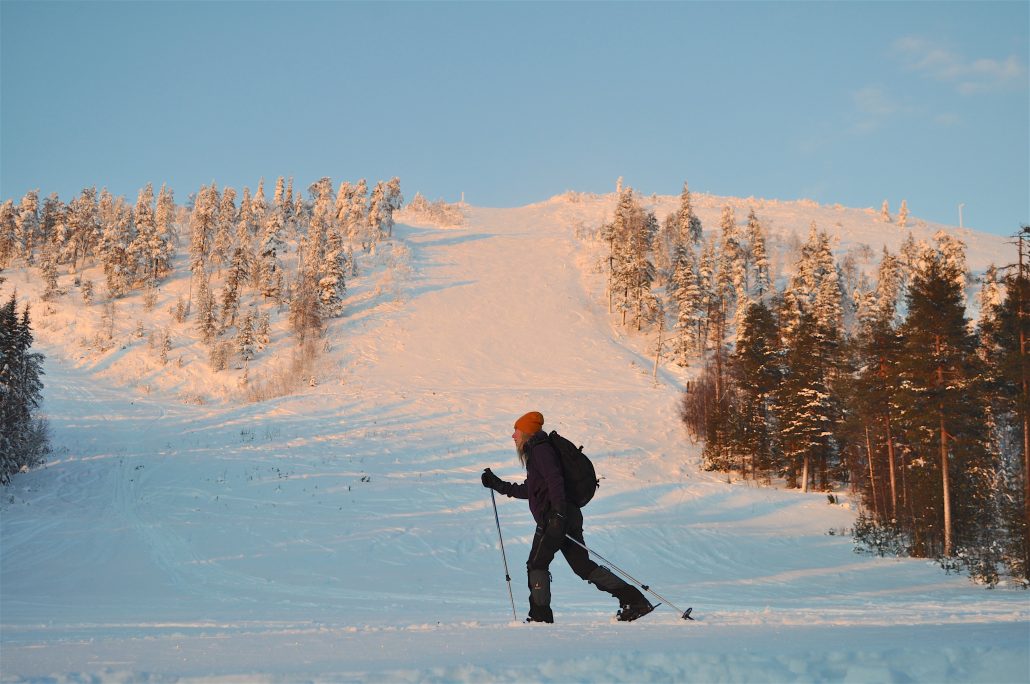 Skishoes glide surprisingly well on flat surface, you go faster than you would with snowshoes. The short size of skis makes it easy to navigate in the forest. Pyhätunturi fell with its skiing slopes is sunbathing at the background.

I got my skishoes for a test from Bliss adventure. As the day light broke (at nearly noon) we left for the 5 km marked path called Tunturiaapa nature trail in Pyhä-Luosto National Park.

In deep powder snow skishoes sink in the snow somewhat. Long skis would be better for floating on top of snow. But compared to snowshoes it still feels easier, in my opinion, as you don’t have to lift the whole foot up, just push the ski forward and save your sweat.

Me after one of my many falls! It took a while to learn just how to keep balance with skishoes. Luckily snow is soft. You can’t control them as well as you can proper backcountry skis.

The trail continued through the woods and out to the open marshland in deep snow. We had a lunch break at Tiaislaavu lean-to shelter, where there is firewood for everybody. 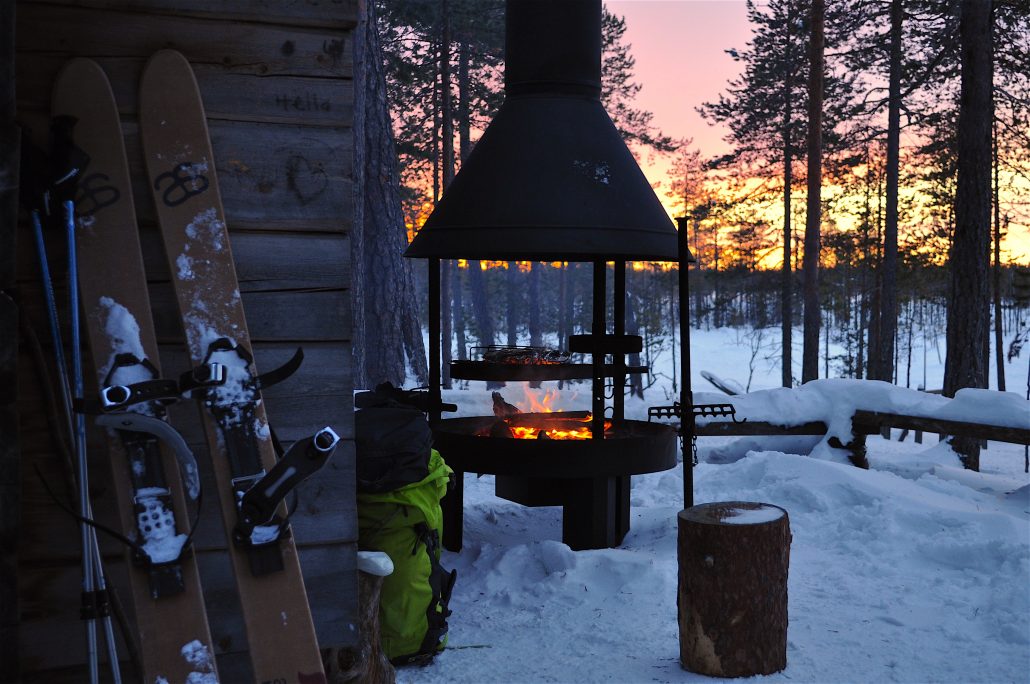 The last leg of the round Tunturiaapa trail was full of small hills, so up and down we went. There the traction and gliding properties were really put to test. Climbing up a steep hill with skishoes is a task. The traction isn’t quite enough, snowshoes would be better. But on gentler hills they work like magic. We couldn’t resist playing around and went up and down some nice hills several times. 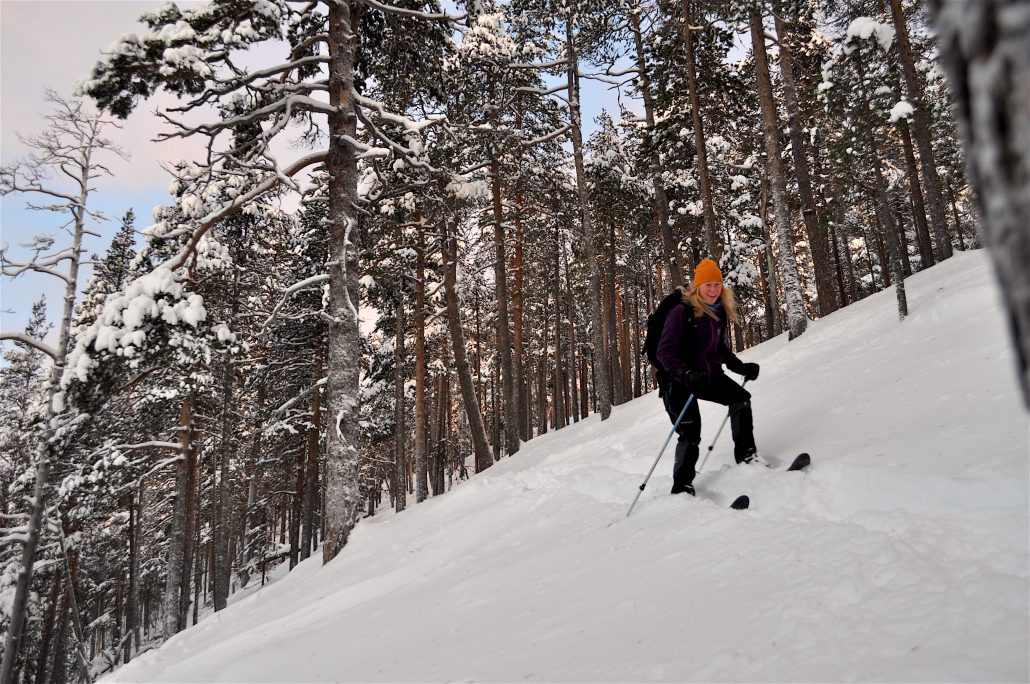 This was one of the steepest hills. Skiing down such a hill with new unfamiliar toys made me nervous, but it was actually a lot of fun!

Not a new hobby

There are still people living in the Altai mountains in northern Asia who use these kind of skis with actual animal skin on the bottom. The Tuwa people have been moving on snow like this for thousands of years. Instead of two poles in each hand, they use one long pole that balances on the way up and helps manoeuvre when skiing downhill.

I recommend skishoes to anyone who loves snow sports or winter trekking. It is a unique way of moving: faster than snowshoeing, slower but more versatile than skiing. 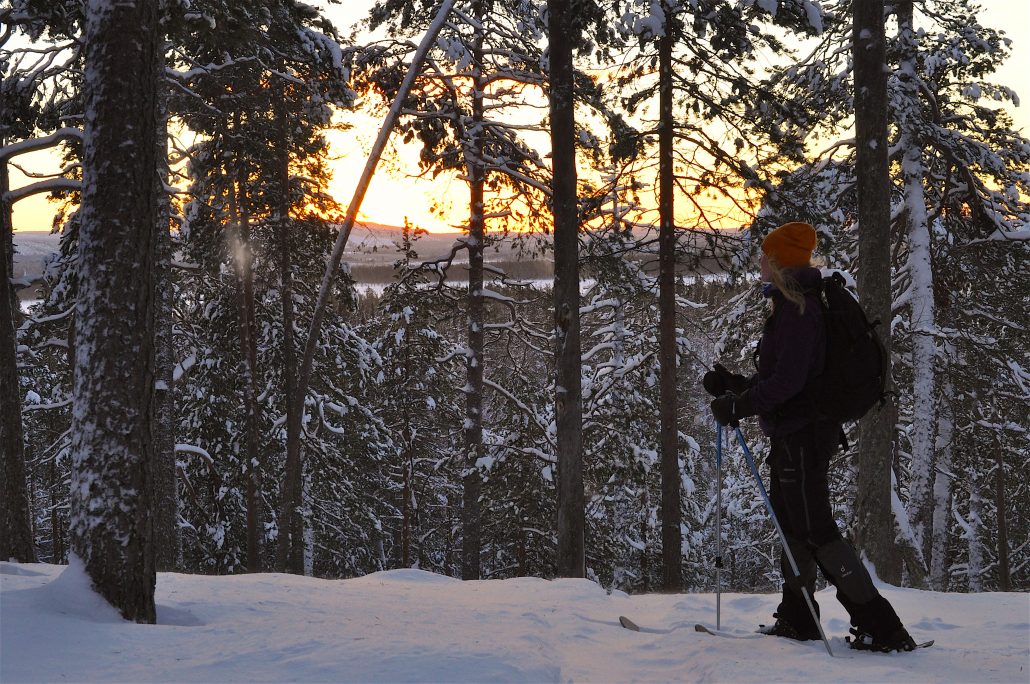 Skishoes, snowshoes and fatbikes for rent at Bliss Adventure

Starting point of this trip on the map