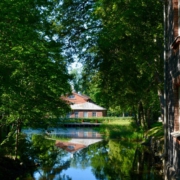 The Embankment Route takes you on an adventure to Fiskars to experience culture and art in many forms. Combining both train and bicycle, it’s easy to embark on it from Helsinki by taking the IC train to Karis. Just remember to reserve a place for your bike in advance to Karis and also for the return trip. The length of the bike ride from Karis to Fiskars and back is 24 kilometres. You can also split it for two days to check out the romantic accommodation available in the Fiskars region.

Length of the route from Karis train station to Fiskars: 12 km (using the same route to return)

You can find the starting point of the Embankment Route on a long map attached to a wire mesh fence next to the Karis Sport Centre. The starting point is just one kilometre from the Karis train station. You won’t get lost, because the Ratakatu Street running parallel to the track leads you directly to the sport centre. The route is marked with brown and white markings, first of which you will find when making your way towards the sport centre.

A resident of Raseborg, Jan-Peter Stenvall, joins me on my outbound trip. He knows all the possible, and some impossible (as far as a Sunday cyclist like me is concerned) cycling routes in the region. The Embankment Route between Karis and Fiskars runs alongside old railroad tracks, as the name suggests. Stenvall tells me that it took a very long time to get the route realized. The project was finally launched by the help of the local Billnäs horse riding club. The club asked the town if they could have a safe riding route at their disposal, and the result was this magnificent lane for light traffic, running through forests and fields, accommodating both horses and bicycles as well as hikers.

(caption) Horseback riders have a dedicated, gravelled lane through the whole length of the route at their disposal.

The first four kilometres from Karis to Billnäs are tarmac, but from Billnäs onwards, it is gravel. The gravel section might be uncomfortable to pedal if you have very narrow tyres on your bike, but most of the time a regular bike is quite sufficient. I have an old trekking bike which works just fine on gravel. After a while, the Embankment Route proves to be an excellent route for Sunday cyclists like me. The tyres roll on so effortlessly, that it feels like I don’t have to pedal at all, when riding on the straight and flat sections. I can follow my progress from the kilometre signs along the route. Several interesting rest stops along the way provide a chance to hop off the bike and cool down.

Even though you could chug on like a train from start to finish, there’s nothing to stop you from taking an extra break off the road. A perfect chance for that is right in the beginning of the route, at Billnäs. Extending on both sides of the Mustionjoki River, the ironworks village provides an impressive milieu for an outdoor snack, for example. Behold and listen to the roaring of the water as it makes its way towards the sea through the floodgates of a magnificent dam. At a certain time of the year, you might also see the fish as they make their way up the fish steps of the hydroelectric plant, and wish them good luck on their journey up to their spawning ground.

The light traffic bridge over the Mustionjoki River provides a great view towards the dammed reservoir of the Billnäs power plant.

If you’re interested in ironworks villages, you might also want to stop by at Åminnefors. If you are not only interested but in love with the ironworks villages, you have seen nothing yet: the Embankment route is part of a longer Ironworks Village Route which boasts five or even six different ironworks villages. My guide Mr. Stenvall is responsible for designing the Ironworks Village Route. In addition to that, he has also designed two other thematic cycling routes for the town: the Castle Route concentrating on castles and fortresses, and the Front Line Route concentrating on war history.

When I said that the Embankment Route as a cycling route is easy, it was almost true, as there is one section that will bring sweat on you. After passing Åminnefors, we arrive at Pohjankuru, where the route runs over a high hill on a long and steep gravel road. “I don’t like this part very much”, says Stenvall when we reach the top of the hill. Luckily, after each uphill, there is inevitably a downhill, and in this case, an equally long one. Rolling down the hill, the sweat dries off and pedalling on feels fun again. When the trains still ran here, obviously they didn’t go up and down the steep slope but rather through a tunnel that goes under the hill. Stenvall says that hopefully one day, the tunnel will be made safe to travel on a bike and attached as a part of the Embankment Route.

As for an icing on a cake, the most beautiful section of the Embankment Route from Fiskars to Pohjankuru, is a gravel road running alongside the shore of Borgbyträsket. Large black alders, oaks and other big deciduous trees border the landscape. I am thinking about what it would look like in the spring when everything is bright green, or in the autumn when the leaves explode in multiple colours. I have to get back here then! Trains still ran here a hundred years ago on tracks that are now gone. A little steam engine called Pikku-Pässi ( Little Ram) used to operate between the harbour and the ironworks, and the tracks were named after it as Pässinrata (Ram Track).

If you want to experience the Embankment Route during the wettest season, you should be aware that the elevation of the route at this section is not much higher than the surface of Lake Borgbyträsket. Last winter, one section of Pässinrata was out of commission for a while due to flooding. In normal conditions, the route is open year round, even in the winter.

A beautiful cultural landscape opens up before my eyes in Fiskars. Every detail seems to be carefully considered. People walking by are dressed so stylishly that I don’t quite know which country I am in right now. Maybe Southern Sweden, as the majestic trees by the riverside would suggest? Or maybe even somewhere in Central Europe?

If you look at the map, the main street of the village seems short. However, as you are on it, time seems to lose its meaning, because you can easily spend several hours exploring it. What the village has to offer owes everything to the numerous artisans, artists and designers working in Fiskars. Thanks to them, many quaint little shops are like galleries – or really ARE galleries. I notice myself holding my breath as I carefully walk among the shelves displaying beautiful glass decorations, skilfully-made ceramics and wonderful wooden utensils.

The fascinating items on display seem endless, and I find myself going over most of the shops twice.

There’s more to see in the ironworks than just the shops and galleries on the main street. My favourite place turns out to be at the south end of the village, next to a building called the Granary. The river at that point flows exceptionally gently, and the tree canopies lean out above the crystal clear water which is so shallow that I can see the sand bottom. Providing a strong contrast, the Granary is an impressive sight to see. Made of black slag bricks, it is a testament to the bygone industrial era, noise of the machines, smoke and long, and heavy work days.

At the opposite side of the village lies the Karin Windnäs’ KWUM Museum of ceramic art. On a bike, it takes only a short while to get there from the Granary. In the summer season, the museum is open every day for visitors. Even the building, designed by the architect Tuomo Siitonen, is a sight in itself.

When I visited the museum, the changing exhibition in KWUM was displaying lovely snowy owl artwork by Kyoung Kim.

There were also works from Margaret O’Rourke on display upstairs. She combines light and almost paper-thin porcelain in her art.

I pedal back to the village from the museum on a gravel road. I relax in a lovely Café Hammarbacken, trying to get my head around the cultural extravaganza I have experienced today. Fiskars is without a doubt a village for those who love art, good food and drink and atmospheric cafés.

The summer season in Fiskars is short, from June to August. The village might be crowded especially on the weekends, but you can try to avoid the crowds by starting early in the morning and/or staying there until the evening. The pace of the village is on the slow side until around 10 AM during summer mornings, and things start to wind down again by 6 to 7 PM when most of the shops close for the day. That doesn’t mean that you have to leave just yet, on the contrary. Why not stay for an hour or two to enjoy some cold drinks on the terrace of Café Bar Pesula, which, by the way, is Bicycle Friendly.

For those who prefer more peaceful times, the ironworks is at its best during the coolest seasons. I find myself already planning to come back here again in the autumn, Christmas and spring. Bear in mind, though, that some of the shops and exhibitions close up for the winter, and others may be open only at certain times. So, please check for the opening hours here.

If it turns out you feel that you can’t get your fill of cycling on the Embankment Route, there’s an extensive MTB trail network in the forests of Fiskars. If you don’t have your own bike or can’t bring it with you, you can rent one at the Fiskars Village Trail Centre.