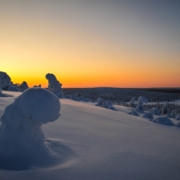 Tankavaara is a small village in the North-Eastern Lapland. Here the Polar Night has begun in the beginning of December. During summers you can pan for gold in Tankavaara, but in winter this place turns into a winter wonderland!

In the backyard of Tankavaara Gold Village there’s a gate that is a starting point of several nature paths. These paths take you to Urho Kekkonen National Park, and one specific trail is open for winter hiking. It leads to Big Tankavaara Hill (Iso Tankavaara) which opens a beautiful view towards the surrounding wilderness.

I went cross country skiing on this 7-kilometer-long winter trail. I wanted to see how it looks like now, when the Polar night has begun. What Polar night means is that the Sun doesn’t rise at all for a certain period of time in Northern Finland. But it is not completely dark, in fact it brings beautiful shades of blue, pink and yellow to the sky!

I was lucky and run into some reindeer wandering in the wilderness. Aren’t they cute! They looked just like from a Christmas tale.

I walked higher to the Big Tankavaara Hill and saw this magnificent view. I had left my skis to wait at the crossing of the nature trail and the path that leads up to the hill. Unfortunately I should have taken snowshoes with me as well, since the snow got too soft and deep on the top so without snowshoes I couldn’t reach the highest point of the hill.

The Sun doesn’t rise above the horizon but there is some daylight a couple of hours, and the colors are simply beautiful. In Tankavaara the sun rises next time in January.

In the night, if the sky is clear, the stars shine beautifully and the Milkyway is visible. And with a bit of luck it is possible to see the Aurora Borealis. I took the following picture some days ago from this same place on a snowmobile sleigh trip to the fells which is as well available for tourists visiting Tankavaara.

And finally, these pictures of the Milky Way I took on the way home. The camera captures the Auroras and starry sky a little bit different than what the naked eye can see, but still seeing the night sky with your own eyes is breathtaking. I feel lucky to live in such a place!

The original verion of this article was published on pohjankettu.fi.