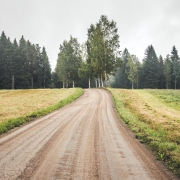 Undoubtedly the most famous road in Finland is the Ox Road of Tavastia (Hämeen Härkätie). Autumn was kind to us in regards to the weather when we embarked on our bicycling trip on the Ox Road. The 70 kilometre-long route is classified as intermediate. On our trip we would learn many things about the Ox Road, the villages along it, and also its history.

The Ox Road is now a host to a bicycle trail gone digital, thanks to the Digitrail Project mentioned in some of our earlier posts. The Digitrail app* will guide you through the section of the road that lies on the side of Tavastia Proper. The route starts from the Village of Letku and goes all the way to the City of Hämeenlinna. The app will guide you along the route in a form of a story, told by a character called Hemminki, also known as Kulkeva.

It was early October when we hopped on our bikes, started the app and off we went! It’s so wonderful how modern times and history can come together with the help of a mobile application as the Digitrail.

Hemminki told us the first story already at the Village of Letku. He said that there is a strange place somewhere in the vicinity of Kapilo, called the Giant’s Tomb. At the tomb, there is stone that looks like a coffin, and if you knock on the stone, it will make a booming sound.

We would’ve surely wanted to try and knock on the stone, but we had much distance to cover, so maybe we will do it next time. We continued on our trip, passing the Häme Nature Centre and Eerikkilä on the way. If we’d started from Turku, we might have stayed the night at Eerikkilä. Eerikkilä is a paradise for those who love nature, for its outdoor and hiking facilities are second to none in Southern Finland. This time, however, we covered the rest of the distance in a day.

Next, our virtual guide Hemminki provided us with directions to Korteniemi, warning us about the caves at Ilveksenluolakallio.

Then, the idyllic village of Porras. The Esker of Kaukolanharju and the Folk Park of Saari would have been only a short distance away from the village. Albeit they both are beautiful national landscapes, we decided to get to know the history of the village of Porras and what the village had to offer.

The Nahkurin Verstas Tannery in Porras is an old and small industrial facility where the tanner used to process his leathers for market. Now it serves as a business offering accommodation and catering services in beautiful surroundings. The Tannery carries on the tradition started by an inn which used to exist in the village.

You might wish to reserve a few days to travel along the Ox Road in order to really enjoy your trip. The Nahkurin Verstas Tannery is a good choice for having a nice, idyllic and peaceful place to stay.

But, let’s get on with our bikes, shall we!

We were making good way, and our digital guide Hemminki shared with us stories from the village of Punelia, salvaged houses and Räyskälä. We passed many picturesque landscapes, but for some reason, a place called Vuohiniemi was particularly lovely. It literally forced us to stop so that we could take in the beauty of the place. Only a small rain shower made us to seek shelter for a while.

Next breath-taking place was the village of Vuorentaa. According to the app, there would be a cup-marked stone! Around here, in the village of Ojoinen, there is one of the largest known cup-marked stones in Finland. There are over 350 registered cup-marked stones in Finland, and they are mostly located in the southern and southwestern parts of the country. So, we were in the “hot zone”, actually. There are many theories about the use of the cups, and most of them believe that they are some kind of sacrificial places where people left offerings such as grain for the ancestors for hunting luck, etc.

Somewhere along the way the tarmac road had changed into gravel, but we just realized that when we were getting close to the City of Hämeenlinna.

The road changed back to a tarmac cycleway which would lead us to the medieval Häme Castle itself. Seeing the silhouette of the castle gave us energy to pedal a little further to our final destination.

*DigiTrail is a mobile application that works in nature like a navigator and thus lowers the threshold to explore nature areas. The application guides the traveller in the woods, shows nearby services and attractions. In addition, it provides interesting information, for example, about the history of the region and can be used to activate its users with different themes, such as forest related sports and cultural content. Read more>> 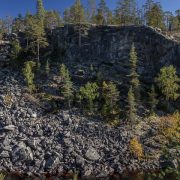 I scanned the Ölokyn Ähkäsy (this roughly translates as the Canyon Groan in local dialect) ring route on the map. It didn’t look too bad, only around 10 kilometres long. However, when I asked about the route at Hossa’s visitor centre and talked to people who had done it, all of them warned me that it was extremely tough and demanding. I needed to set aside at least 5-6 hours. Apparently there are great changes in elevation and lots of rocks and roots.

But I was willing to take on the challenge. I put on my hiking boots and backpack. In my backpack I had packed the minimum amount of gear: a camera with acouple of lenses, a couple of sausages, a sandwich and 2 bottles of water. It’s important to be careful on the route, as your mobile phone won’t pick up any signal apart from at the highest points.

As the crow flies, it’s about 5 kilometres along Ölökyn Ähkäsy to the Ölkynperä (Canyon rear) lean-to and back. Just by looking at the map you can tell that the views are going to be rugged and spectacular. After all, we are at  Julma Ölkky (Cruel Canyon), one of Finland’s three largest canyon lakes born of a large crack in the land. The others two are Iso Helvetinjärvi (Big Hell’s Lake) and the Toriseva canyon lakes in Virrat.

The birth of the gorge took place more than 2 billion years ago. The canyon is a rift valley, which is caused by earthquakes or transitions in the ancient continents. Later the ice age honed the rift, but the traces are clearly visible on the vertical wall that towers almost 50 metres out of the lake. The canyon already looks quite impressive when viewing it on Google Earth.

The Toriseva canyon lakes and Helvetinkolu in Helvetinjärvi (Hell’s Lake) National Park were formed in the same way. This canyon formation process is however completely different to that of Oulanka’s canyon, where water and ice have carved the gorge from the bedrock.

The trail starts from Julma Ölkky’s parking place, which is around a 20 minute drive from Hossa’s visitor centre. It must be said,  the road was not in the best condition. A little Fiat will hit its undercarriage, if you don’t drive carefully.

At the starting point there is a summer cafe, which had just gone into hibernation. It’s open until 31.8. When it’s open, you can explore Julma Ölkky on a guided boat tour.

I approached the circuit following the signposts, which take you counter-clockwise along a route marked with orange dots. I chose 10am as my departure time, as the sun was shining appropriately from the east, its light hitting the west shore. The canyon’s orientation is pretty much north to south for the whole length, which meant that for the final part of the journey the sun would be shining from the west and lighting up the canyon walls on the eastern shore.

Already half a mile in, the scenery was reminiscent of a fantasy film. I felt like calling Hollywood and asking them to come here and film a remake of Lord of the Rings.

On the outward journey, the path runs right along the edge of the rocks, so I ended up having to stop repeatedly to take pictures of scenes that were even more  impressive than the last. What a nuisance.

However, those with vertigo need not worry. You don’t have to go so close to the edge if you don’t want to. Just as I thought I had reached the best spot, a more spectacular view opened out before me a few minutes along. Every now and then I heard the sound of a waterfall. A number of waterfalls formed from streams flow out from the canyon walls and from some of them you can see rainbow colours in the evening sun.

Those who like climbing can scramble up the cavity called the Devil’s church, where you can find a guest book. This time I left the Devil in peace and continued my journey.

Approximately halfway to the lean-to, the canyon splits into two parts. The lake continues along the western gorge and the eastern depression, Sitkansola, is essentially swamp. The scenery certainly didn’t get any worse.

Finally I reached the lean-to at Ölkynperä, where I met 3 sausage barbecuers. I told them about Värikallio (Colour Rock), a few kilometres away, where you can see amazing rock paintings from thousands of years back. Together we agreed that you can find everything in Hossa, and that it had most definitely earned its new status as a National Park in honour of Finland’s 100th Year of independence.

After this, no more people crossed my path.

On the way back the terrain is more forested and some of it is quite far from the rock’s edge. It was this proportion that was full of steep climbs and descents. However, in a few places, I came across a viewing point. Julma Ölkky’s own ancient rock paintings are near the water’s edge, but they can be better seen by boat.

The Ölökyn Ähkäsy route is indeed challenging, but I still wouldn’t say that it’s a bad route, as long as you are in possession of good basic health and your legs function properly. I completed the trip with a few photos and breaks in a total of 4 hours, walking on my own. With a group, it would probably take 5-6 hours. And if you go the gym, it might be a good idea to do some extra squats!

I recommend wearing hiking boots to protect your ankles, but in good dry weather you will probably be fine in trainers. Doing the trek in autumn, I had to cross a few swampy areas that were a couple of metres wide, which would have meant my socks getting wet if I wasn’t wearing proper hiking boots.

I don’t recommend the route for children, unless they have a lot of hiking experience. Even my 67 year old father stayed behind at the cottage making food. Although this wasn’t due to his age, rather the knee surgery that he had a couple of months ago.

Making the most of digitalisation, I saved my route onto my mobile and in reality it works out at around 12km, with changes in elevation on top of that. From a scenery freak’s point of view, I must say that it’s an impressive canyon and totally underrated.

Perhaps when it becomes a National Park, awareness of this amazing place will grow. Even though more publicity does of course mean more use, which carries its own risks, it is still the kind of place where all Finns should be encouraged to come and marvel at their own natural wonders instead of jetting off to Gran Canaria. Lapland is of course Lapland, but you don’t always need to disappear beyond the arctic circle to see something unique. Highly recommended!

Map to the lean-to at Ölkynperä

This article was executed in cooperation with the municipality of Suomussalmi. The author stayed at Camping Hossan Lumo during the trip.